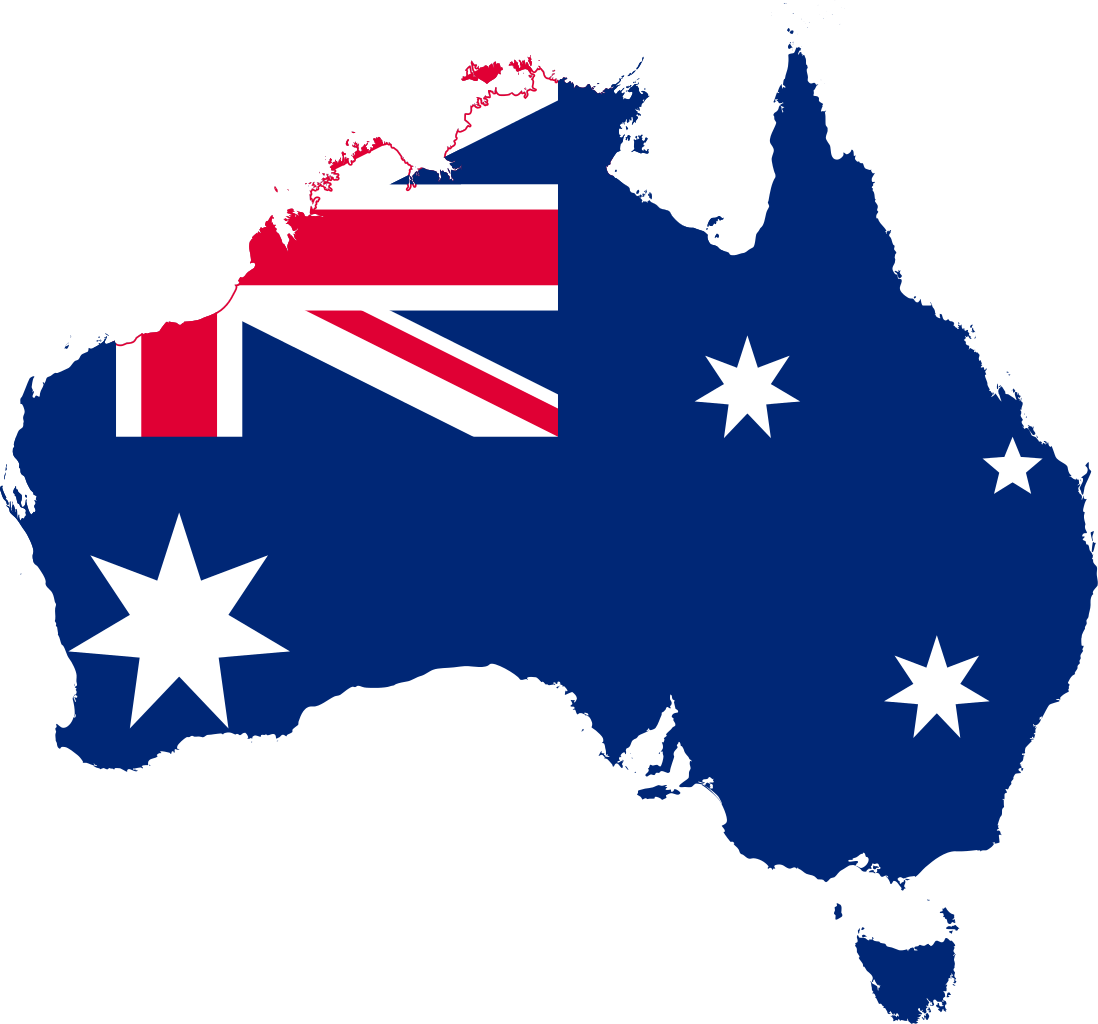 Latest data from the Australian government (October 2021) puts the population of Australia at 25,787,022.

The number of people living in Australia has been growing rapidly in recent years. Since the start of the 21st century, it has grown by more than a quarter – from 18.9 million in 2000 to just over 24 million today.

Today, Australia’s population growth rate is 1.4% per year. The latest data from the Australian population clock shows that the population increases by one person every minute and a half.

This growth is fuelled largely by immigration – more than a quarter of the people living in Australia today were born outside of Australia. Relatively high birth rates for an industrialised economy are also helping to boost growth.

In 1958 John F Kennedy called America a “nation of immigrants”. He could just have easily been talking about Australia, where population growth has been built on wave after wave of immigration.

Note: A more detailed table listing the population of Australia by year can be found at the end of this article. Click here to visit the population table.

The aboriginal peoples of Australia are thought to have first arrived around 40,000-50,000 years ago. They went on to expand across the continent and, by the time the first European settlers arrived in the late 17th and early 18th centuries, Australia already had a population estimated to be between 350,000 and 750,000 people. Unforgivably, by 1900 this number is believed to have fallen to just 93,000 people as European settlers brought with them disease and violent conflict.

The first European migrants to Australia were criminals, sent to the British penal colony in Sydney in 1788. Over the next eighty years, 162,000 convicts were transported to Australia on 806 ships. Eighty percent were men, twenty percent women.

Alongside the convicts, more conventional settlers also travelled to Australia, mostly from Britain and Ireland. A few were the families of convicts, but the majority came in search of a new life. By the end of the 19th century, estimates put the Australian population at more than 3.5 million.

Once Australia became self-governing in 1901 – as the Commonwealth of Australia – more formal immigration began. Because of its distance from Europe, moving to Australia was less attractive to settlers than moving to the United States or Canada. The government solved this problem by offering to pay for immigrants’ passage to Australia. By the start of the second world war, Australia’s population had almost doubled, to 6.9 million.

After the second world war ended, millions of Europeans began to move to Australia. More than a million British citizens took advantage of the Assisted Passage Migration Scheme, which allowed entry to any adult who could pay ten pounds – hence the nickname ‘Ten Pound Poms’.

Europeans, often displaced by conflict, were also encouraged to migrate. For example, in the late 1940s and early 1950s more than 160,000 Greeks displaced by the second world war and the Greek civil war emigrated to Australia.

Immigrants from Commonwealth countries were encouraged to come to live in Australia and, over time, restrictions were relaxed to open up immigration to people from across the world.

As we will see later in this article, the distinct waves of immigration into Australia have not just increased the overall population – they have made Australia one of the most ethnically diverse countries in the world.

The first Australian census – the centenary census – was held in 1911. Since 1961, Australia has conducted a census every five years – more frequently than most countries.

The 2016 Australian census will take place on 9 August 2016. It is taking a pioneering approach to online data collection, and the Australian Bureau of Statistics estimates that more than 15 million people will complete the census online, instead of via the more traditional paper forms.

Australians by country of birth

The proportion of Australians today who were born in Asia has increased significantly compared to those who were born in the United Kingdom or Europe. This demonstrates the changing nature of immigration into Australia.

In the 2001 census, Australians were for the first time asked to identify their ancestry. They were allowed to pick up to two ancestries, so the totals number of ancestries chosen added up to more than 100%.

The question was repeated in the 2011 census, returning slightly different results. English (7.2 million) had overtaken Australian (7.1 million) as the most commonly chosen ancestry. Irish and Scottish ancestries were fairly close to each other, chosen by 2.1 million and 1.8 million respectively, followed by Italian, German and Chinese, each chosen by 0.9 million people.

The difference in answers between years shows the subjective nature of the question, but the data is interesting nonetheless.

Australia does not have an official state religion.

The results of the 2011 census indicated that Christianity is the most popular religion in Australia. There are 13.2 million Christians in Australia (61.1% of the population.

2 million people (9.4%) did not respond to the question, or answered the question unclearly.

The changing shape of religion in Australia 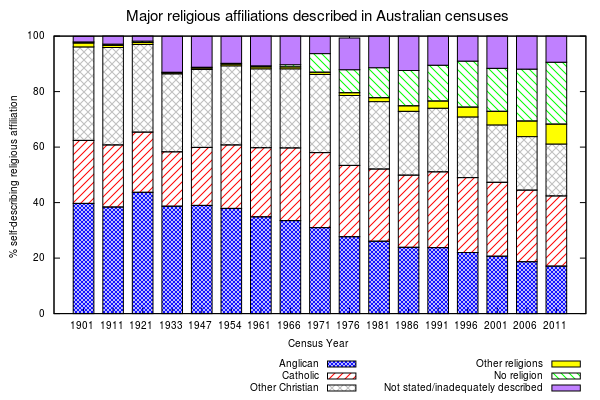 By contrast, Christianity is in decline in Australia – the share of respondents who classified themselves as Christian fell from 67% to 61% between 2001 and 2011.

Although Australia has no formal state language, Australian English is widely used, and official government communications are in English.

There are thought to be more than 250 indigenous Australian aboriginal languages but, sadly, most of them are now extinct.

Around 60 aboriginal languages are still in use today and around 11% of Aboriginal Australians report that they speak an indigenous language at home. As part of an attempt to preserve these languages for the future, a number are now included in school curriculums.

Meriam and Kala Lagaw Ya, two languages collectively known as the Torres Strait Island languages, are spoken primarily on small islands in the Torres Strait off the coast of Queensland. They are still in use today, but the number of native speakers is in the hundreds.

A number of Tasmanian languages, which are distinct from Australian aboriginal languages, were used by the indigenous people of Tasmania. They are all extinct today and are believed to have last been used in the 1830s.

For an overview of aboriginal languages visit the Creative Spirits website or the Wikipedia page on Australian Aboriginal Languages.

Education for school age children is compulsory in Australia. Children start school at the age of 5 years and stay until at least 15 years of age (normally 16-17 years). The exact leaving age varies slightly from state to state.

As a result, Australia has a high literacy rate among children. UNESCO data from 1995-2004 shows that the rate is 99%. The literacy rate for Australian males and females is identical.

The same UNESCO data shows that the rate for adults aged over 15 years is lower, at 96% for both women and men. This is probably because many immigrants who come from countries with lower rates of literacy and are less likely to have developed literacy skills.

Australia has a well developed tertiary education system and, spread across Australia, there are 43 universities. Forty are publicly run, one is private, and two are international universities. Between them they employ more than 100,000 staff. There are 977,000 students enrolled in Australia’s universities – an increase of 70% since 2001. 37.2% of 24-35 year olds in Australia have a university degree.

In total, Australia spends 4.9% of GDP on education.

Australia is one of the least densely populated countries in the world.

Only three countries – Mongolia, Namibia and Iceland, have fewer people per square kilometre.

The Australian Bureau of Statistics reports that, in 2014, Australia’s population density was 3.1 people per square kilometre.

Despite being such a sparsely populated country, most people in Australia actually live in relatively densely populated areas – usually in and around coastal cities.

This population map of Australia demonstrates how the population clusters along the eastern and south-western coasts, and just how large, empty and remote the rest of Australia is. 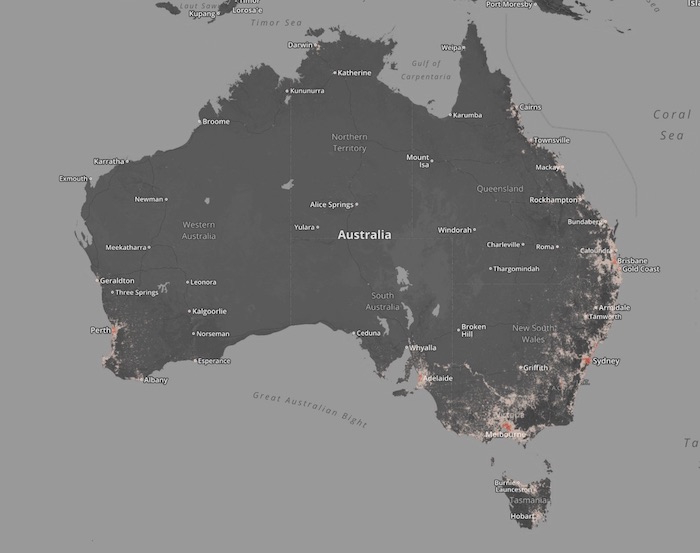 (For an interactive version of this map, visit the Guardian website: http://www.theguardian.com/news/datablog/ng-interactive/2014/dec/22/the-most-detailed-map-of-australian-population-density-ever)

Information from the World Bank shows that 89% of Australians live in urban areas, the remaining 11% live in rural areas.

More than half of the 24 million people living in Australia live in just five cities – Sydney, Melbourne, Brisbane, Perth and Adelaide, each of which has a population of over one million people.

One in three Australians live in just two of those cities – Sydney and Melbourne.

Canberra, the capital, is only Australia’s seventh largest city.

Cities in Australia by population

Here is a table listing the ten largest cities in Australia by population.

Australia is made up of six states and ten federal territories (just three of which are on the Australian mainland).

Of the states, New South Wales is the most populous – in 2015 it was home to 7.6 million people. Tasmania, an island in the south of Australia, is the smallest state with just 516,600 people.

Of the territories, the Australian Capital Territory is the largest – 390,800 people live in the ACT.

Four of Australia’s overseas territories have no permanent population. They are the Australian Antarctic Territory, the Ashmore and Cartier Islands, Heard Island and the McDonald Islands, and the Coral Sea Islands.

Here is a table showing the population, area and population density of Australia’s states and territories. You can filter and sort this table using the arrows and search box within the table.

Note1: Data on the Australian state populations, plus the population of the ACT and Northern Territories is drawn from here. It is accurate to September 2015, and has been rounded to the nearest hundred.

Note2: Population data for the smaller Australian territories is not updated as regularly, so is based on estimates included on their respective wikipedia profiles. Because of the small numbers involved, data for smaller territories has not been rounded. Some of the territories, for example, the Australian Antarctic Territory and the Coral Sea Islands do not have a permanent population.

Census data shows that the sex ratio at birth in Australia is 1.06 males to every female. This is roughly equivalent to the sex ratio in other advanced economies, such as the European Union (1.06/1) or the United States. (1.05/1).

Because of the increased longevity of women compared to men, when it comes to over 65s, there are 0.84 males to every female.

Analyst Mark McCrindle argues that, although the sex ratio for Australians from 15-64 years shows that there are 1.03 men for every women, this hides the fact that women over the age of 35 outnumber men. He argues that there is, in fact, a “man drought” in Australia. 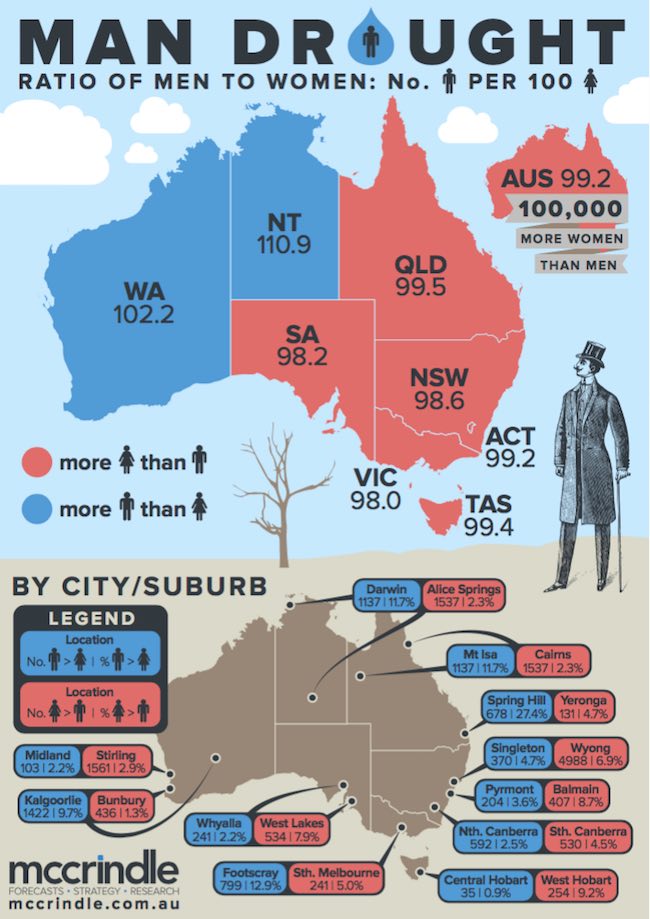 Although men outnumber women in territories with large mining operations and military bases, such as Western Australia and the Northern Territory, in the rest of Australia, it is the other way round.

The source of McCrindle’s data is not clear.

Life expectancy in Australia continues to increase, and Australians today live longer than almost anyone else in the world.

The fertility rate of women born in Australia is higher than it is for women born overseas.

This population pyramid of Australia is based on 2016 data. 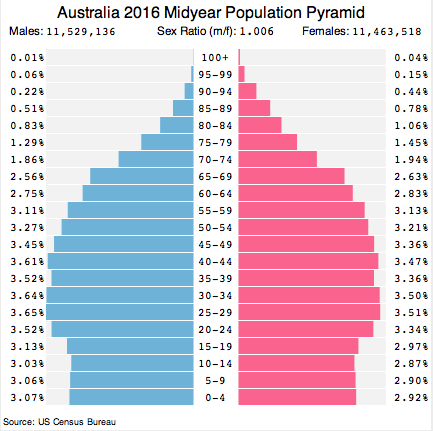 The pyramid hides an important difference between the population profile of Australian born residents and that of recent immigrants, who are disproportionately in their twenties and early thirties. You can see the stark difference in age breakdown in this image which superimposes one group on the other.

The Australian Bureau of Statistics also provides an animated and interactive pyramid of Australia’s population. You can use it to see how age breakdowns have changed between 1971 and today, and how they are likely to change between today and 2061.

This table lists the population by decade, from 1790 onwards.

The first census was held in 1911, so all of the population figures before then are estimated. Figures before 1911 also do not include the indigenous population of Australia.

Much of the data and some of the images in this article come from the Australian Bureau of Statistics, provided under a Creative Commons license. They have an excellent, comprehensive and very user friendly site – please visit it.

We also recommend visiting profile.id, who provide summaries about population data from Australia and New Zealand.