The Statistics Bureau of Japan reported that the population of Japan on 1 May 2016 was 125,360,000, another slight decrease in population.

How many people live in Japan?

Despite a fall in population over the past year, and almost one million people over the previous five years, Japan is still the tenth largest country in the world by population.

Four in every five people in Japan live on the main island of Honshu, which has a population density of 447 people per square km.

Japan has the longest life expectancy in the world today. The average baby born in Japan today can expect to live until 84.

As you can see from the chart, Japan’s population steadily increased through the 20th century, with the exception of a dip in the 1940s caused by the Second World War.

After many years of slowing population growth, the number of people who live in Japan has begun to decrease. The fall began in 2004, and has accelerated since then.

The main causes of the fall in Japan’s population are its low birth rate combined with its also low death rate. People in Japan are living longer and having fewer babies – and those that do choose to have children are delaying starting a family until later in life.

This could present a major challenge for Japan, as the number of people of working age is falling compared to the number of Japanese pensioners. The Government believes that, by 2060, 40% of Japanese citizens will be over 65. This, combined with fewer tax receipts from a smaller working population, will make it harder for Japan to fund pensions and healthcare for the elderly.

The problem of Japan’s falling population is so acute that the Japanese government has been considering mass immigration – a dramatic step in a country as ethnically homogeneous as Japan.

The United Nations estimates that, unless Japan’s low fertility rate is also raised, it would need 650,000 immigrants every year to stabilise population levels.

Japan is one of the most homogeneous and least ethnically diverse countries in the world.

Official data, which measures citizenship rather than ethnicity, reports that 98.5% of the population is Japanese. The remaining 1.5% is a mixture of foreign nationals.

The Brazilian community in Japan is made up mainly of descendants of Japanese immigrants who went to Brazil early in the 20th century. According to IBGE data, there are approximately 1.5 million people of Japanese descent in Brazil. In the 1980s and 1990s a large number of Brazilians of Japanese descent in turn emigrated to Japan, encouraged by the Japanese Government which made it legal for Japanese first, second and third generation descendants to return. (Related article: Population of Brazil.)

None of the data above includes the 54,00 US service personnel in Japan, their 42,000 dependents, or the 8,000 Department of Defense employees in Japan.

Examples of ethnic groups that are indigenous to Japan include the Ryukyuans and the Ainu who, although small in number, have distinct cultural and ethnic identities.

The Ryukyuan, also known as Okinawans, are indigenous to the islands of the Ryukyu archipelago, which make up the Okinawa Prefecture today.

The Ryukyuan population is approximately 1.6 million. This is made up of approximately 1.3 million people who live in the province of Okinawa, and a further 300,000 Okinawans who live elsewhere in Japan.

The Ainu are the indigenous people of northern Japan. It wasn’t until 2008 that they gained official government recognition as a minority in Japan. It is believed that the Ainu population of Japan is approximately 24,000.

Some also classify Koreans (and their descendants) in Japan as a distinct ethnic group. Many ‘Zainichi’, as they are also known, were bought to Japan when it was a colonial power in the first half of the 20th century. They were left stateless at the end of the second world war.

Japan has two main religions – Shinto and Buddhism. There are also a small number of Christians in Japan and a number of atheists.

Many Japanese consider themselves to be syncretists. That is to say that they practice more than one religion at the same time – for example, both Shintoism and Buddhism. This is why the percentages above add up to more than 100%.

Very few people in Japan report that they are atheists.

Japan has no official state language, but Japanese is the first language of 99% of the people in Japan.

Japanese has, as with most languages, a range of dialects. The Tokyo dialect is considered by many to be the standard form of Japanese.

The Ryukyuan languages, spoken in Okinawa in the south of Japan, are different enough from standard Japanese to be considered a distinct language.

Other small minority groups, such as the Ainu and Evenki in the north of Japan also have distinct languages.

Education in Japan is compulsory for children between the ages of 6 and 15.

Most children continue in education until they are 18. About 75% of high school graduates go on to attend university or another higher education institution.

It is widely accepted that the literacy rate in Japan is around 99%, although this cannot be confirmed because the Japanese government has not conducted a survey of literacy rates since 1955.

UNESCO has cast some doubts on the assumption that Japan’s literacy rate is 99%. They note that this figure would be difficult to achieve when taking into account low literacy rates in some minority groups.

Population density in Japan is 336 people per square km, which makes Japan the 40th most densely populated country in the world.

Four in every five people in Japan live on the main island of Honshu, which has a population density of 447 people per square km. 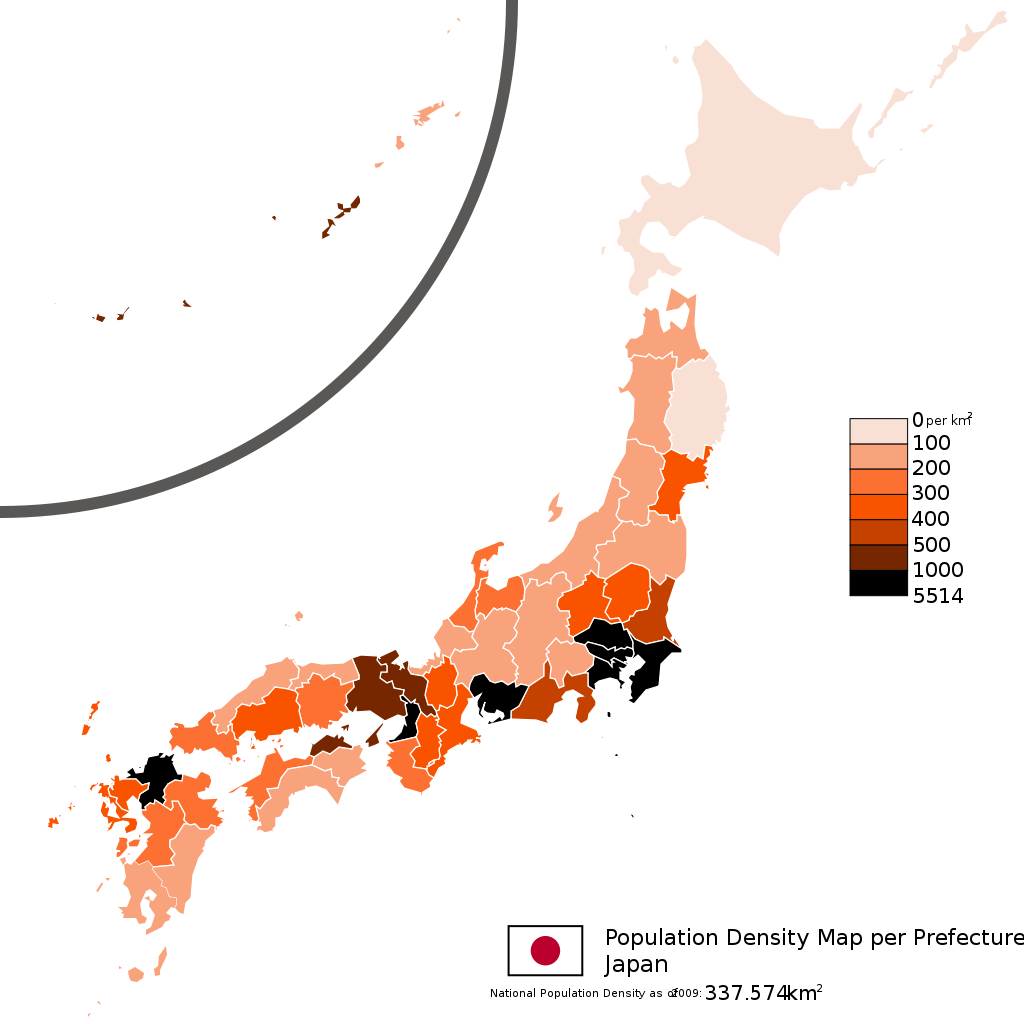 This population of 9.3 million represents all of the people who live in Tokyo’s 23 wards, which make up the city proper. However, the wider Tokyo metropolitan area has a larger population of 13,574,022.

Some people consider the Greater Tokyo Area to be a Japanese megacity with an estimated 2014 population of 37,832,892. This wold make Tokyo the largest megacity in the world, ahead of the Shanghai megacity which has a population of 35 million.

In contrast to the rest of Japan, the population of Tokyo (the city itself) is steadily increasing. In the 2010 census, its population was recorded as 8,949,447.

This table lists the 10 largest cities in Japan by population.

The sex ratio for Japanese people across all age ranges is 0.95 males for every female.

This is broadly in line with other major democratic and industrialised countries.

The low ratio of men to women aged over 65 can be partly explained by the effects of the second world war, but a larger factor is that women tend to live longer than men in Japan, as in most societies.

Japan has the world’s longest life expectancy. The average Japanese child born today can expect to live until 84 years of age.

Japanese females born today can expect to live until 87 years of age. This is the longest female life expectancy in the world.

Japanese males born today can expect to live until 80 years of age. This is the 6th longest life expectancy in the world, after San Marino (83 years) and Singapore, Switzerland, Iceland and Israel (all 81 years).

The Japanese diet has long been cited as the reason for Japan’s long life expectancy, but a wide range of factors, including diet, genetics, universal healthcare and social equality combine to provide such a healthy life expectancy.

This is relatively low, but is an increase on the low of 1.26 children per women recorded in 2005.

Here is a population pyramid of Japan based on 2016 data. 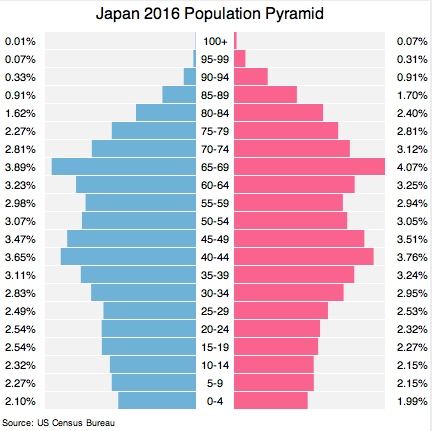 The bulge of people aged 65-69 represents the larger than normal number of children born in the years immediately after the war.

The lower than expected proportion of people aged over 69, and men aged over 69 compared to women over 69, is a result of the increased number of deaths during the war.

The table below lists the historical population of Japan by year.

The best source for accurate statistics about Japanese demographics is Statistics Japan which has resources available in both English and Japanese.