This estimate was taken from New Zealand’s constantly updated population clock in January 2017 (see below for more information) and is based on the official estimate for June 2016 of 4,693,000.

New Zealand is the 123rd largest country in the world by population and the third largest in Oceania (after Australia and Papua New Guinea).

How many people live in New Zealand today

Statistics New Zealand, the government statistical office who produced this estimate, also publishes a New Zealand population clock which shows up to the minute predictions of how many people live in New Zealand. 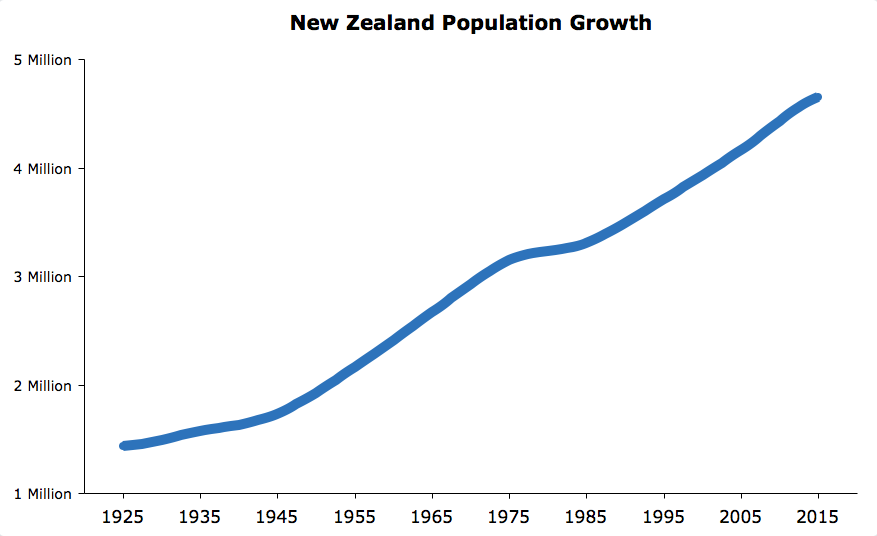 New Zealand’s population is growing at a rate of 0.8% per annum. Or, put another way, this means that there is one birth in New Zealand every nine minutes and one death every fifteen minutes. In addition net migration (immigration minus migration) produces a new resident every six and a half minutes.

For a developed nation, New Zealand has a relatively high population growth rate. This is partly because of high levels of immigration (estimated at 60,000 per year) and partly because it has a higher birth rate than most developed countries.

Although growth is expected to slow slightly in coming years, New Zealand’s population is likely to reach 5 million by 2026.

Auckland is the largest city in New Zealand. The capital city is home to 1,454,300 people (June 2015 estimate). It is the only city in New Zealand with a population of more than one million people. Auckland’s people are younger and more ethnically diverse than the national average.

Much of the information in this article is derived from the 2013 census results.

Source. Note: totals add up to more than 100% because people were able to select more than one ethnicity in the 2013 census.

The Maori were the first group to arrive in New Zealand. No one is sure of the exact date of their arrival but recent scientific evidence, including radiocarbon dating, indicates that they arrived from East Polynesia somewhere between 1250 and 1300 AD.

Europeans first ’discovered’ New Zealand in the 15th century, but it wasn’t until the 18th century that the first permanent settlers arrived. While European settlers prospered, a combination of disease and war between Europeans and Maori led to a dramatic decline in the Maori population – from around 86,000 at the time of the first European settlement to just 42,000 in 1896. Life expectancy at birth fell from over 30 years before European arrival to an estimated 25 years for Maori men and 23 for women.

New Zealand’s close ties with its Pacific Island colonies led to increasing immigration from the 1940s onwards. Although increasingly independent, many Pacific islands (for example the Cook Islands) have a constitutional relationship with New Zealand and their citizens are New Zealand citizens able to settle freely anywhere in the country. Today, around 300,000 (7.4%) of New Zealand’s population is counted as Pacific islander.

In recent years New Zealand’s immigration policy has undergone a dramatic shift and is now based on a points system. As a result, immigration from Asia has increased significantly – to the extend that 471,708 (11.8%) of New Zealanders reported in the last census that their ethnicity was Asian.

For many years, the use of Maori was discouraged in New Zealand and the number of speakers declined dramatically.

However, the Maori language has undergone a resurgence in recent years. In 1987, Maori was declared an official language of New Zealand and a number of Maori language TV channels are now broadcast.

Samoan is the most prominent non-official language, followed by a number of other languages spoken by immigrants to New Zealand – for example, Hindi, Mandarin Chinese, French and German.

New Zealand’s literacy rate (reported by UNESCO) is 99% for both men and women.

Education in New Zealand is compulsory for children aged 6-16. Most are taught in free state funded schools but there is also a number of private schools and home schooling is allowed.

Statistics New Zealand have a handy calculator that you can use to estimate your life expectancy. 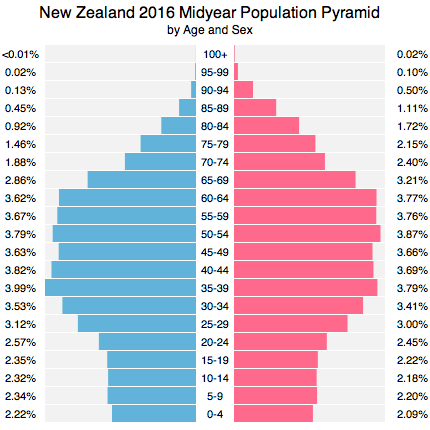 We also recommend taking a look at this interactive New Zealand population pyramid.

In parts, this work is based on/includes Statistics New Zealand’s data which are licensed by Statistics New Zealand for re-use under the Creative Commons Attribution 4.0 International licence. We would like to thank them for providing such a detailed resource. They have a comprehensive and easy to understand series of articles on their site that contain data and information about the population of New Zealand and we recommend visiting.