How many people live in Russia today?

Although Russia’s population has been gradually declining since the fall of the Soviet Union, the fall has slowed and stabilised in recent years. Since 2011, the population has increased modestly. The population of Russia in 2016 was 146,519,759. Data for 2017 has not, at the time of writing, been published.

When Crimea was annexed in 2014 Russia’s population received a one off increase of 2,248,400 people (based on Ukrainian census data). This increase is included in the total population figures listed in this article.

The main cause of this fall in population was the shock and economic uncertainty of the transition from communism to capitalism. Russians emigrated in large numbers, often to Europe, other parts of the former Soviet Union and Israel, in search of a better and more stable life.

In an uncertain economic and political climate people put off having children and the Russian birth rate fell. This combined with an increase in the death rate – caused by factors such as poor health and healthcare, increased violence and increased consumption of alcohol – meant that, from 1992 onwards, more people in Russia were dying than being born. 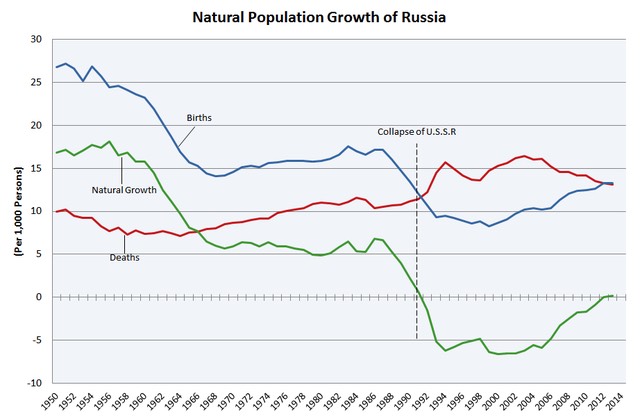 As a result of the increased stability of recent years population decline in Russia gradually slowed and, in 2012, Russia saw its first population increase in two decades. Since then, Russia’s population has been steadily, if very very modestly, growing.

The incorporation of Crimea, annexed from Ukraine in 2014, boosted Russia’s population by a further 2.2 million people.

Russia holds a census roughly once every decade. The last Russian census was held in 2010. It followed an earlier census in 2002. The next Russian census is likely to take place in 2020, although this has not been confirmed by the Russian government.

The Russian government had planned to delay the 2010 census until 2013 because of a lack of funding. However, at the last minute, funding was allocated to allow the census to go ahead in 2010 after all.

Russian population predictions are usually developed by extrapolating the data from the most recent census.

Data from the 2010 census can be found on the official Russian federal statistics service website (in Russian).

The largest ethnic group in Russia is ethnic Russians. There are 111 million ethnic Russians in the Russian Federation, making up 80.1% of the population.

In total there are 185 ethnic groups in Russia. You can see a full list here.

The Russian census doesn’t record religious belief, so all data is based on surveys and estimates. For this article, we have used data from the 2012 Arena Atlas of Religions and Nationalities of the Russian Federation.

After Christianity, Islam is the second largest religion in Russia, with 6.5% of the population. Other religions include native religions (1.2%) and Buddhism (0.5%).

Islam is the second largest religious group, with 6.5% of the population. Although some surveys claim that the number of Muslims in Russia is much higher – between 10% and 20% of the population – this is because people have identified themselves in censuses and other surveys as belonging to “Islamic ethnic groups” in Russia, and not necessarily as actively religious.

Although Russia does not have an official state religion, the Russian Orthodox Church has an increasingly visible and influential role in Russian society and politics. Its growth has been helped by by the introduction of a law in 1997 which limited the ability of other religious organisations (which often come from outside of Russia) to undertake missionary work in Russia.

It is important to note that many of the Russians who identify as religious, and particularly those who identify themselves as Orthodox Christians, are non-observant. This means that they rarely or never attend church.

It is likely that the lack of engagement with religion in Russia is, at least in part, due to the Soviet Union’s legacy of atheism and repression of religion. Marx, and later Lenin, both referred to religion as the “opiate of the masses”, a drug which allowed workers to be exploited by the ruling classes.

During the Soviet era, religion was tolerated to an extent, but very strongly discouraged. In the 1920s church property was seized by the state, thousands of religious people including priests were imprisoned or killed, and publishing religious material and books was made illegal.

Other languages in Russia

A number of other languages have legal status in Russian regions. They are:


Because of the high number of immigrants in the Russian Federation, normally from other former Soviet countries, a large number of other languages are also widely spoken in Russia, even if they have no official status. The 2010 census reports the following numbers, although because many migrants are undocumented the real numbers are likely to be much higher:

Many of Russia’s 130 plus languages are spoken primarily in Siberia and Russia’s Far East, but others are found and spoken in the Caucasus, Northern Russia and the Caucasus.

Some languages have already been declared extinct by UNESCO – examples include Arman, Kamas and Karelian. Others are classified as endangered, and at high risk of becoming extinct within a generation or two. These include some regionally recognised languages, such as Kalmyk. Some, such as Ainu or Enets, have less than 100 speakers.

Russia has a large and comprehensive network of schools, colleges and universities, and school education in Russia is free. As a result, it has a very high literacy rate of 99.4% (male: 99.7%, female: 99.2%).

According to a 2012 OECD survey more than half of Russian adults (53%) have attained a tertiary (university) education. This is almost double the OECD overage of 32%, although there are questions about the variable quality of Russia’s university education.

Most of Russia’s population, and most of its largest cities are in Western and Southern Russia.

Moscow is the most populous city in Russia and the second largest city in Europe (after Istanbul).

Other major cities in Russia (data from 2010 census) include St Petersburg (4.9 million), Novosibirsk (1.5 million) and Yekaterinburg (1.3 million). See the table below for more details.

Estimates, based on data from the 2010 census, indicate that in 2016 Moscow has a population of 12.2 million permanent residents. With the addition of an estimated 1.8 million people with official temporary residency, the population rises to 14.0 million.

However, the true population of Moscow is likely to be higher as a result of undocumented and illegal immigration which was not captured in census results. Estimates which include approximately 1 million undocumented migrants push Moscow’s population up to over 15 million.

Cities in Russia by population (table)

Russia has a population density of 22 people per square mile (8.4 per square kilometer).

Siberia is far less densely populated than European Russia, with a density of 8 people per square mile (3 per square kilometer). Some Siberian regions, such as the Koryak Okrug have a population density of less than 0.1 people per kilometer. Or, to put it another way – one person for every ten kilometers.

Russia is an industrialised economy with a heavily urbanised population. Almost three quarters of Russians (74.0%) live in urban areas, compared to just over one quarter (26.0%) of people who live in rural areas.

In contrast to many countries, where urban populations are increasing as people move from the country to cities, Russia has been de-urbanising in recent years, and the number of people in urban areas compared to rural areas has decreased very slightly over the past 20 years.

The sex ratio in Russia at birth is 1.06 males to each female. This is roughly the same as the world average of 1.07 boys to each girl at birth.

However, across the entire population, the proportion of male to female is much lower – 0.86 males to every female.

At the extreme, among elderly Russians – those over 65 years of age – there are three women for every man.

This gap stands in dramatic contrast with the rest of the world, where there are, on average, 1.02 men for every woman. There are two main reasons for this difference.

The second is that Russia, and other former Soviet countries, are still suffering significantly from the high death toll among men in the second world war. Data from 1950, for example, shows that, for every 100 women in Russia, there were only 76.6 men.

However, this hides a massive difference between the life expectancy of Russian men and women. Russian women live for 76.5 years – more than eleven years longer than the average Russian man, who lives for just 65.1 years.

This difference in Russian life expectancy between male and female is the largest in the world. Although women across the world live longer than men on average, they normally live only five years longer.

Experts have not identified a single cause for this massive gap. It is thought to be a combination of factors, including high levels of alcoholism, violence, diet, pollution and poverty. Russia also has one of the highest male suicide rates in the world. It also has one of the world’s highest death rates from cardiovascular disease.

This indicates that, excluding factors such as migration, Russia is experiencing a period of slow natural population growth.

This is a significant increase on the lowest fertility rate in modern Russian history of 1.157, which was recorded in 1999. This remains lower than the fertility rate of most industrialised countries, where a fertility rate of just over 2.000 is thought necessary to ensure that the population remains static.

This population pyramid of Russia is based on data from 2015. 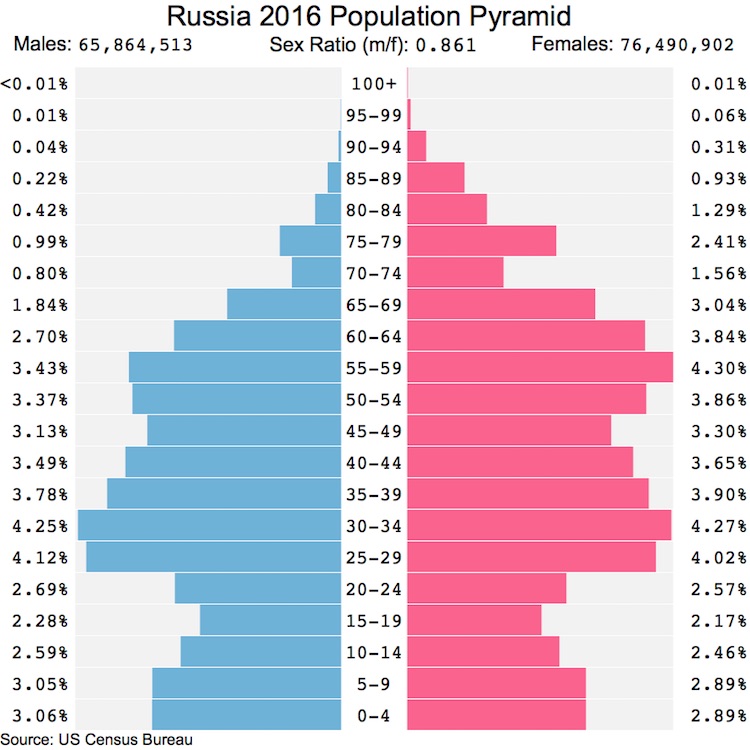 Two things stand out about the Russian pyramid.

The first is at the top of the pyramid where you can clearly see that the number of women aged over 70 is much higher than the number of men of the same age. This is because of the massive casualty rate among Russian men during WW2.

The second is the relatively low number of children and young people aged under 20. This is largely the result of a significant drop in birth rates after the collapse of the Soviet Union.

This table contains historical Russian population data from 1927 to the present day.

Note: no data was available for the years 1941-45 because it was not collected during the war.