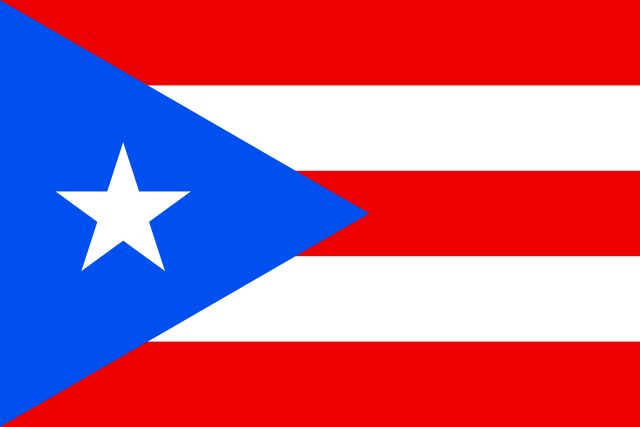 The Puerto Rico population is 3,474,182 (latest U.S. Census Bureau data). The number of people living in Puerto Rico has fallen by more than 250,000 people in the last five years.

Puerto Rico is a territory of the United States and not a state in itself. However if Puerto Rico were a state it would be the 30th largest state by population in the USA, sandwiched between Connecticut and Iowa.

The Commonwealth of Puerto Rico is a collection of islands in the eastern Caribbean. It is located to the east of the Dominican Republic, Haiti and Cuba. The capital of Puerto Rico, and its largest city, is San Juan.

People born in Puerto Rico are US citizens, although they do not have voting representation in Congress and are not able to vote in US Presidential elections while they are living in Puerto Rico.

How many people live in Puerto Rico today? 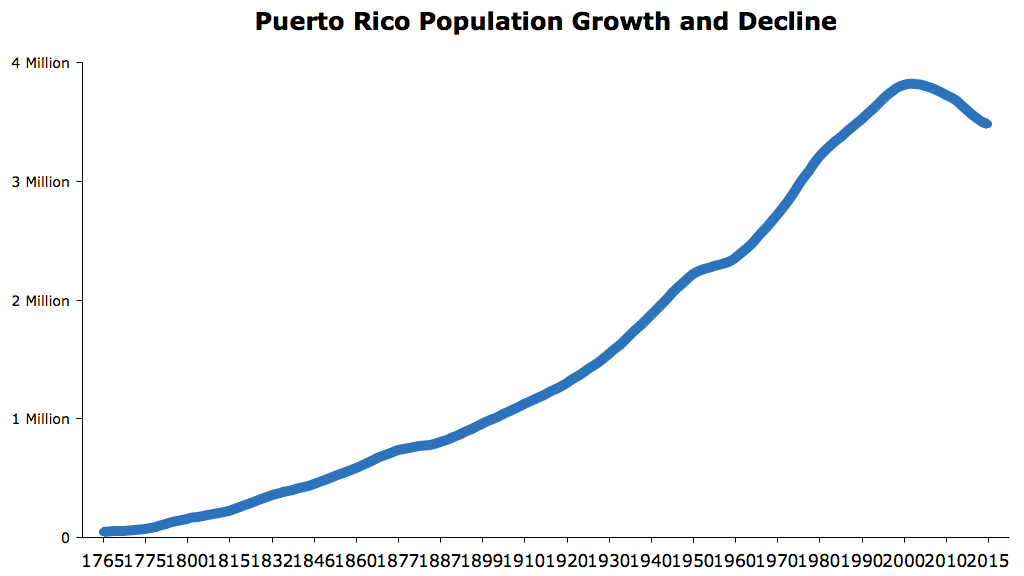 After strong population growth in the 1980s and 1990s the Puerto Rico population has begun to decline.

The number of people living in Puerto Rico fell by 2.2% between the 2020 10 censuses. Since the 2010 census the rate of population decline has increased further and in the last five years the population has fallen by an additional 6.8%.

CNN puts the rate of migration out of Puerto Rico at 230 people per day.

Research by the Pew Foundation shows that the majority of Puerto Ricans who left for the US mainland went either for job related reasons or for family reasons.

Here is a list of the 10 largest cities in Puerto Rico. Population data is from 2010.

Puerto Rican population in US

The latest US Census bureau estimates (2014) indicate that there are 5,266,738 people of Puerto Rican origin in the United States outside of Puerto Rico. This includes people born in Puerto Rico who emigrated and the descendants of earlier emigrants. 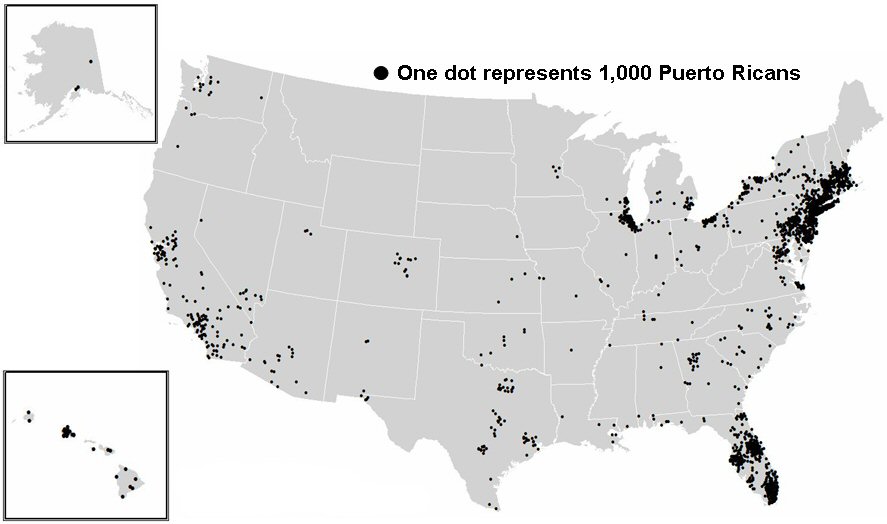 As you can see from the map the New York/New Jersey area and Florida have a high density of Puerto Ricans. Each dot on the map represents 1,000 Puerto Ricans.

Puerto Rico is 10 times more densely populated than the United States as a whole.

The latest available data on the ethnic composition of Puerto Rico is from the 2010 census. This indicated that 99.0% of people living in Puerto Rico were Hispanic or Latino.

Before Spanish colonists began to colonise the islands in the early 16th century, Puerto Rico was inhabited by the Taino Indians. Historians estimate that the Taino population of Puerto Rico was somewhere between 20,000 and 50,000 people in 1508. Just 40 years later less than a hundred remained on the island.

Because of its historic links to Spain, Roman Catholicism is by far the largest religion in Puerto Rico. However, more recent links with the United States mean that there is a substantial and increasing number of Protestants in Puerto Rico.

Estimates of the breakdown of religious groups in Puerto Rico vary but a recent (2014) study by the Pew Research Centre reported that 56% of Puerto Ricans are Catholic and 33% are Protestant. A further 8% are other Christians and 2% follow another religion.

Roman Catholic56%
Protestant33%
Other Christian8%
All other religions2%

Puerto Rico is believed to be home to approximately 5,000 Muslims and 3,000 Jews. Puerto Rico has the largest Jewish community in the Caribbean.

Reliable data on the number of people in Puerto Rico who are not religious is not available, although the percentage is believed to be much lower than in other parts of the United States – probably in the range of 2% to 5%.

Spanish is the primary language spoken by the vast majority of people in Puerto Rico. The U.S. Census Bureau reports that, in 2010, 94.9% of people spoke a language other than English at home.

Language other than English94.9%
English5.1

Because of this almost all business, including government business, and education in Puerto Rico is conducted in the Spanish language.

In an attempt to improve the territory’s economic prospects and build closer links with the rest of the United States, the government in Puerto Rico is increasing the number of services and documents it provides in English and increasing the amount of English language education.

Although there are obvious practical benefits from increasing the use of English in Puerto Rico, such plans are also controversial. Opponents are concerned that, if not handled well, they could lead to a decline in the use of Spanish.

Unless otherwise noted data in this article comes from the US Census Bureau.

The Pew Research Centre has a section on Hispanic trends on its website which often contains interesting articles and data about Puerto Rico.

Another website we recommend visiting is Welcome to Puerto Rico, which provides plenty of background information about the Commonwealth of Puerto Rico.

Finally the Institute of Statistics of Puerto Rico (Instituto de Estadísticas de Puerto Rico) contains a wealth of demographic information. Note: this site is in Spanish only.