Georgia and Armenia have both rocketed into the top ten today, and Australia have finally cleared the one medal per million barrier leaving them the best placed of the world’s major countries.

See below for full details.

Every four years the USA and China battle it out for top place in the Olympic medals table. Sure, they get the most medals, but they’re also two of the four largest countries in the world. But, what would happen if we counted Olympic medals based on the population of each country instead?

Well, check out the tabs below for more information about what would happen if we counted Olympic medals per capita instead. The first tab provides an up to date medal table for Rio 2016 based on the number of people in each country. The second tab contains a map and table listing the per capita medal count for the last Olympics, London 2012.

The news of today is that New Zealand are closing quickly on second place, there are two new entrants into the top ten (Georgia and Armenia) and Australia have broken the one medal per million people barrier.

Two medals for New Zealand yesterday puts them in perfect position (one medal per 459,570 people) to challenge for second place – two more medals would see them overhaul the Bahamas.

Slovenia (one medal per 516,942 people) and Jamaica (one medal per 558,667 people) both picked up medals yesterday too.  They’re chasing hard from 4th and 5th place respectively. Jamaica, in particular, are expected to pick up more sprint medals in the next few days.

The United States’ Rio medal tally per capita remains a little disappointing – just one medal for every 3.8 million people. They’re continuing their slide down the table from 38th to 40th yesterday and from 40th to 41st today. They’re only just behind Russia though (they’ve also got medal per 3.8 million people).

After a slow start, hosts Brazil are beginning to pick up medals – their eleven medals come at a price of one per 18.9 million people, putting them in 64th place.

Note: Two medals have been won by Independent Olympic Athletes – they are not recorded in this table. 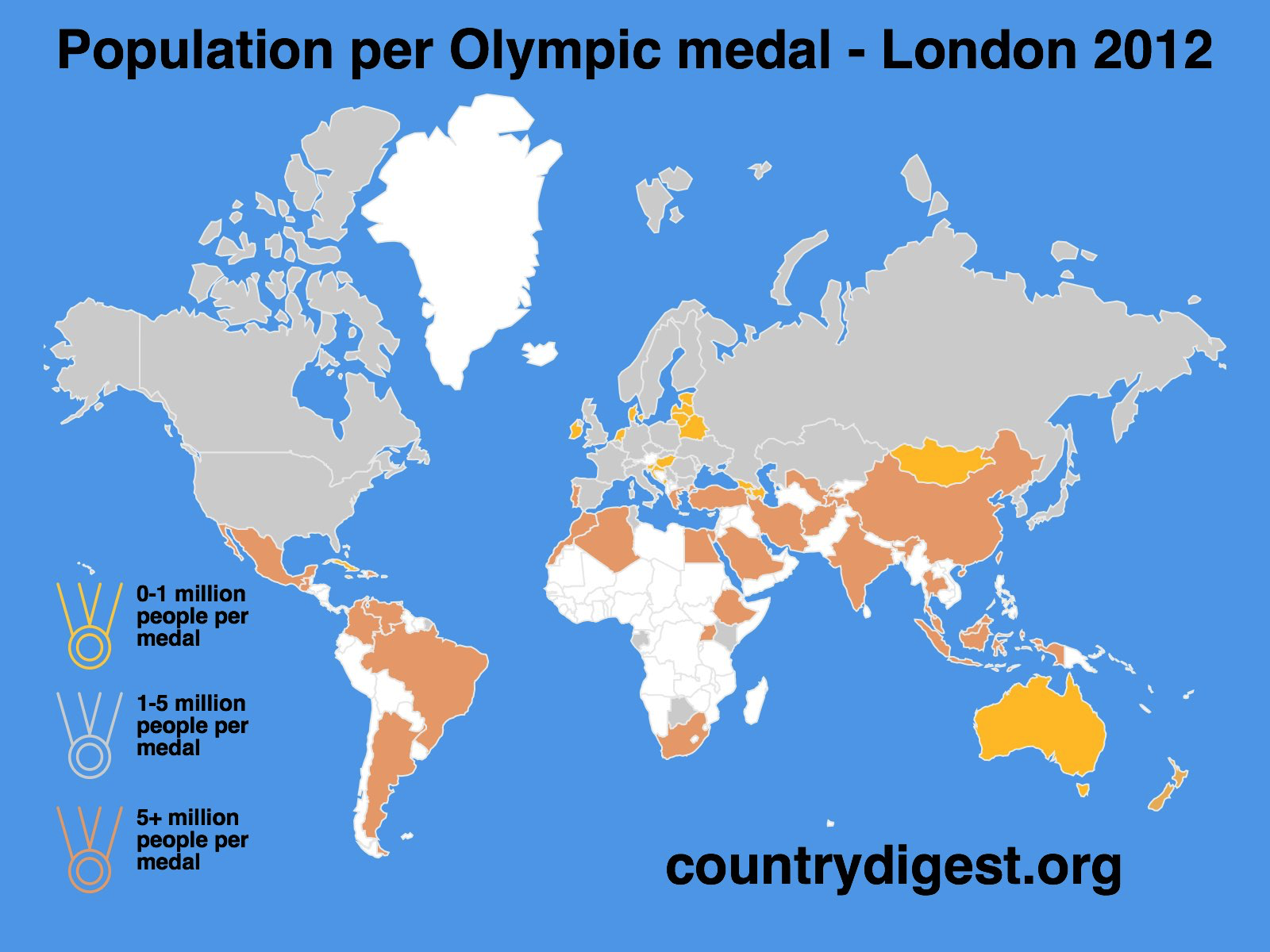 Although the USA and China topped the official 2012 London Olympic medals table, our unofficial per capital medal table shows a very different story.

Grenada may have just one a single gold medal, but when you consider that they have a population of just over 100,000 people – the equivalent of a small city – their achievement is impressive enough to put them at the top of our table.

Hosts Great Britain managed a medal for every million people, more or less, making them the best performer among the major Olympic nations. Certainly a far stronger performance than the USA (one medal per 3,143,175 people), Russia (one medal per 1,809,877 people), or China (one medal per 15,647,540 people).

Underperforming countries in the medal table are India, who picked up six medals (two silver and four bronze) at a rate of 214,338,339 per medal, and Indonesia, whose two medals came at a rate of one per 129,352,500 people.