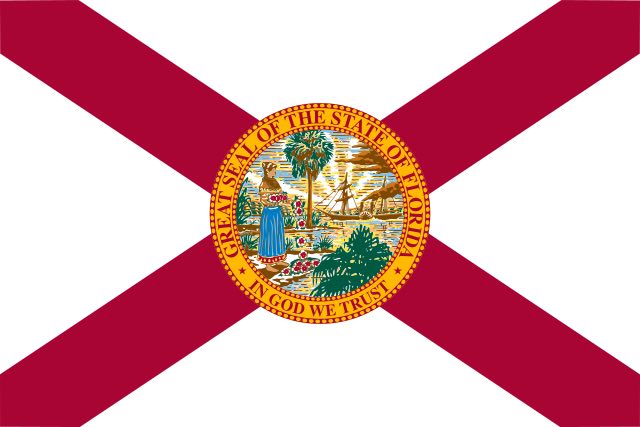 The Florida population is 20,612,439 (latest US Census Bureau data). This makes Florida the third largest state in the US by population, after California and Texas.

Florida is a State in the South East of the United States, a peninsula on the Gulf of Mexico. Florida is the fifth fastest growing US state, and the 8th most densely populated state in the US. Its largest city is Jacksonville (population 880,619) and its state capital is Tallahassee (population 190,894).

How many people live in Florida today 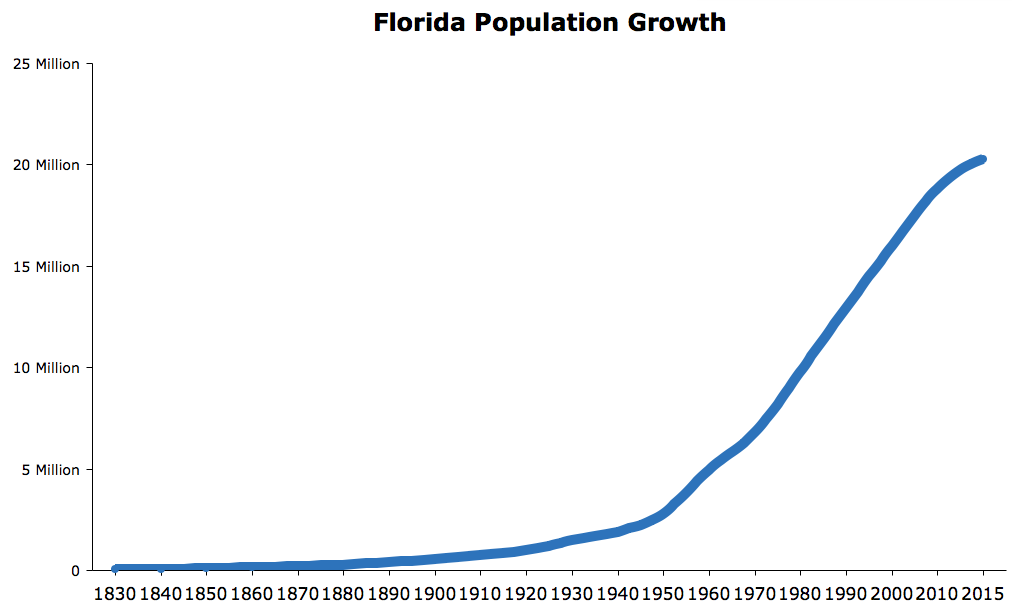 This is based on data from the 2010 census, when the Florida state population was 18,801,310. Since the census was undertaken, Florida’s population has grown by 7.82%, the fifth largest rate of population growth in the country (see below for more details).

Florida is known as a retirement state and, today, almost one in five (19.1%) of people living in Florida are aged over 65 – that’s the highest proportion of retirees in the country. In one county – Sumter County – more than half of residents are aged over 65!

On the flip side, Florida also has the 8th lowest percentage of young people of any state in the US – only 21.9% of Floridians are aged under 18.

During 2014, Florida passed New York to become the third most populous state in the USA. Assuming that the two states relative positions don’t change, Florida stands to gain an additional seat in the US House of Representatives after the 2020 census.

Jacksonville, which is spread out over 747 square miles, also holds the distinction of being the largest city by area in the continental United States. (Four Alaskan cities are technically larger because they are part of massive administrative boroughs – Sitka, for example, is four times larger than Jacksonville, covering 2,870.3 square miles).

Other major cities in Florida with a population of more than 500,000 people are Miami, Tampa, Orlando, and St Petersburg. Tallahassee, the state capital of Florida is only its seventh largest city.

The table below contains a list of the largest Florida cities by population.

For more detailed statistics and a full list of the state’s 214 most populous cities, read our article on the largest cities in Florida.

The table below lists the five most populous counties in Florida. If you click on the county name you will be taken to an article about the population of that county.

Florida’s impressive growth rate shows no sign of slowing – in the first five years after the 2010 census, Florida has added another million and a half people (that’s a Florida population growth rate of 7.8% win just five years) and moved past 20 million people for the first time.

The table below lists the population of Florida at the time of each US Census since 1830.

As you can see from the Florida population density map below, the majority of people in Florida are clustered in a few major cities or along the coast. Unsurprisingly for a state which has the longest coastline in the continental US, more than 75% of the people in Florida live within ten miles of the coast. The largest single racial or ethnic group in Florida is White (non-Hispanic) which makes up 55.3% of the population.

This percentage has been decreasing steadily for several decades – down from 77.9% in 1970. If this trend continues, it is likely that Florida will become a non-white majority state within the next decade.

Hispanic or Latino is the next largest single group within Florida (24.5%). Florida’s Hispanic population has been steadily increasing (up from 6.6% in 1970) although growth has slowed since the 2010 census.

Just under one in five (19.6%) people living in Florida today were born outside of the USA.

Christian (all denominations)70%
Not religious24%
Jewish3%
All other religions3%

According to the Pew Research Center, Christianity is the most common religion in Florida. In total, 70% of the population of Florida is believed to be Christian.

Just 6% of people are members of a non-Christian faith – the largest being Jewish (3%). The number of Muslims, Buddhists and Hindus is lower than 1% in each group.

A further 24% of Floridians are not religious.

Protestant Christians are the largest Christian denomination in Florida, making up 40% of the population. Of the total population, 24% of people are reported to be Evangelical Protestants, 14% Mainline Protestants and 8% Historically Black Protestant.

The next largest group of Christians in Florida is Catholic, making up 21% of the population, followed by Mormons (1%) and Jehovah’s Witnesses (1%).

English is the most common language in Florida as well as being the official state language.

At the time of the 2010 census, English was the primary language of 73.6% of people in Florida.

Spanish is the next most common language among the Florida population, spoken by 19.54%, followed by French Creole (1.84%).

Average life expectancy in Florida is 79.4 years, the 22nd highest in the USA.

Life expectancy varies between different racial or ethnic groups in Florida – from 88.9 years for Asian Americans in Florida down to 75.8 years for Black Floridians.

There is also a wide variation in life expectancy between different parts of the state – the fourth highest disparity in the entire US.

Residents in Collier County, one of the state’s richest counties, can expect to live to 80 years, while those in Baker and Union, two of the poorest counties in the state, have a much lower life expectancy of 68 years.

Unless otherwise noted, data in this article comes for the US Census Bureau. Other Florida population resources that we recommend are: