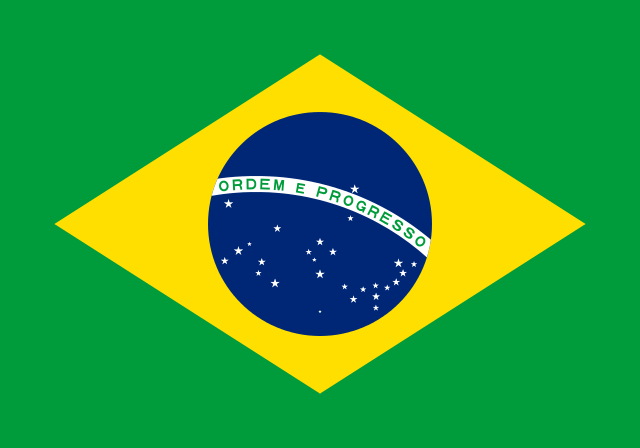 In August 2016 Rio de Janeiro in Brazil hosted the Olympic games for the first time. The Games took place during a period of concern about the Zika virus. The Brazilian government urged women to delay pregnancies and there is speculation that this could cause an alarming drop in the birth rate in Brazil.

How many people live in Brazil today?

The latest up to date population estimates can be found by visiting the official government of Brazil population clock, which is constantly updating.

The figures are estimated, based on extrapolations from the 2010 Brazilian census, which indicated that the Brazil population in 2008 was 190.8 million people. 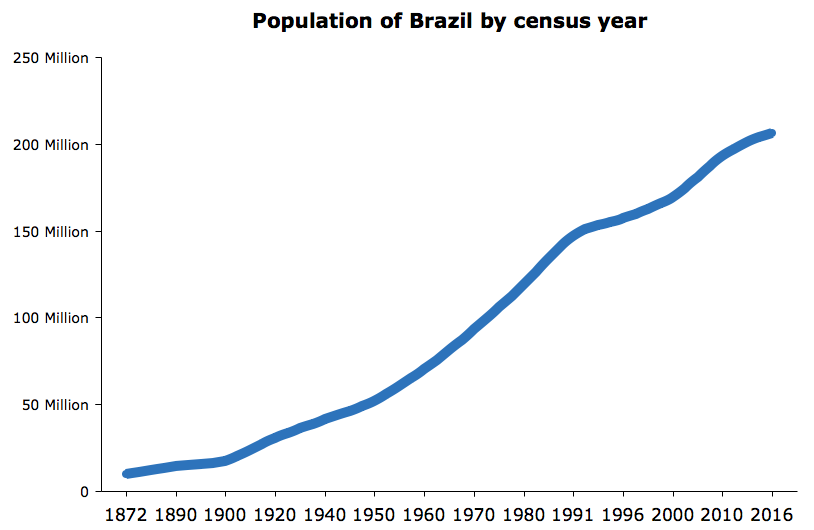 The population of Brazil has been steadily growing since records were first kept. This chart shows population growth since the first census was taken in 1872. The underlying population data used to create this chart can be found in the table at the end of this article.

Over time the ethnic groups have mixed, leading to an ethnically diverse society.

Brazilian census data classifies people as one of five main groups. They are:

The 2010 census reported the following breakdown:

Racial identity is more fluid in Brazil than in many countries of the world. People often define their race based on physical appearance rather than genetic heritage, and people who are more successful are more likely to be considered (or to consider themselves) white.

Mixed into these groupings are substantial Japanese-Brazilian (largely in the São Paulo region) and Jewish (largely based in the Rio de Janeiro area) communities.

The indigenous people of Brazil are, as you would expect for such a geographically large country, from many distinct ethnic groups. Povos Indigenas no Brasil estimates that there are 246 different indigenous Brazilian peoples.

Around 100 indigenous Brazilian tribes are still isolated and uncontacted.

Christianity is the largest religion in Brazil. According to the 2010 census, 86.8% of Brazilians are Christian.

Another 22.2% are Protestants, largely Evangelical and Pentecostal. Protestantism, particularly Evangelicalism, is growing rapidly while the proportion of Roman Catholics is falling.

The other significant groupings are those with no religion (8%) and those who practise Spiritism (2%).

A further 3.2% practice other religions, including small Buddhist, Jewish and Islamic populations.

Portuguese is the official language of Brazil, and is spoken by almost everyone in the country.

In addition to Portuguese at least a further 200 indigenous languages are spoken in Brazil today. They are all spoken by relatively small communities, however.

The most widely spoken indigenous language in Brazil is Kaiwa Guarani which has around 15,000 native speakers. Most are in the Southern Brazilian province of Mato Grosso do Sul. A few hundred additional speakers are across the border in Northern Argentina.

Brazil has a comprehensive and well funded state education system. The constitution of Brazil guarantees that a proportion of state taxes (25%) and federal taxes (18%) is set aside each year for education funding.

The administration of education in Brazil is decentralised, being mostly run by individual states and municipalities.

Education is compulsory for all children aged from 6-14 years.

There are more than 2,400 universities in Brazil. Around ten percent of Brazilian universities are publicly funded; the remaining 90% are private universities or run by charitable organisations.

The University of São Paulo is regarded as the best university in Brazil. According to the Times (UK) it is ranked between 201st and 250th in the world.

Literacy rates vary widely across Brazil, however. The 2010 census indicated that rates ranged from 97% in Distrito Federal to 77% in Alagoas.

Brazil is one of the least densely populated countries in the world.

This makes Brazil the 192nd most densely populated country in the world. 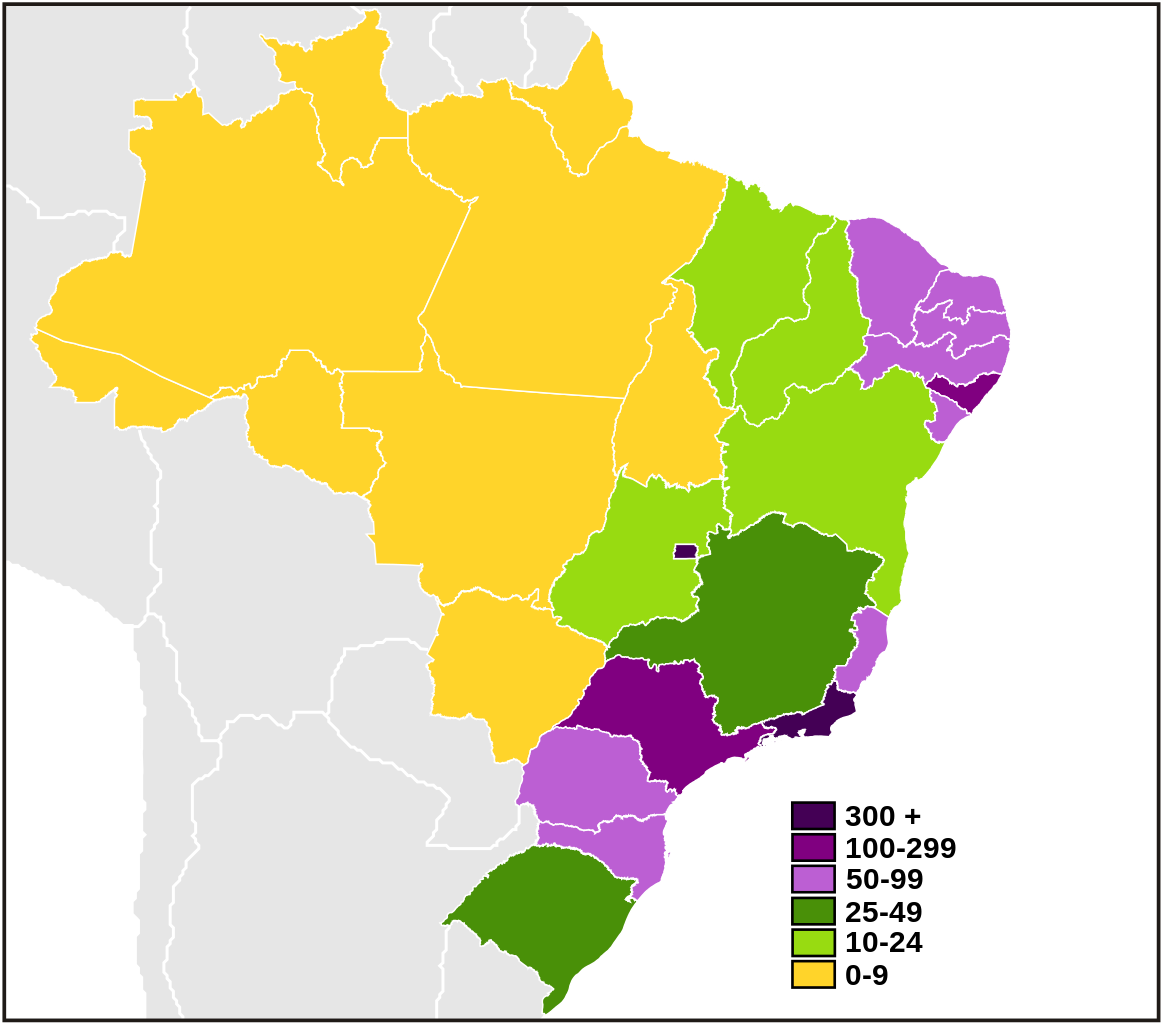 The majority of the Brazilian population is located in Brazil’s eastern, coastal states. As a result, it’s north-western, interior, states are much less densely populated.

Brasília, the capital city, is the fourth largest city in Brazil. Although Brasília was only founded in 1960, today it is home to 2,852,372 people.

Here is a list of the ten largest cities in Brazil.

Unless otherwise stated, data in this section is from the CIA Factbook, and dated 2015.

Fertility rate in Brazil is 1.77 children per woman. 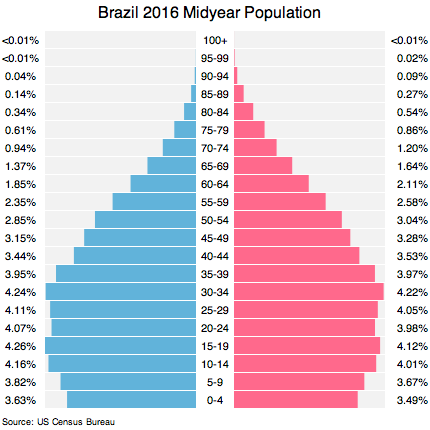 It demonstrates that Brazil has a comparatively young population.

This table details the population growth of Brazil, with an entry for every year in which a census took place in Brazil.

The first census was held in 1872 and censuses have been held roughly every ten years since then.

The table also includes population data for 2016, based on the official Brazilian population clock on 9 June 2016.